Official LEGO news has been slow of late, so there hasn’t been much to post here, or is there? One of ULUG’s newest members Quinn Rollins was unsatisfied with the available offering of Official LEGO Batman figs, and has built some of his own 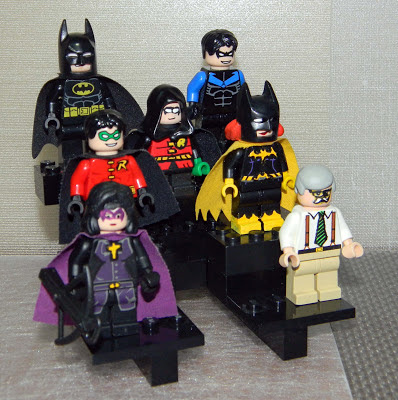 I’m not usually one for custom figures, So much so that I cringe when my kids try to tell me how I can customize the figs we have with a sharpie. But these are diffident, you can tell this is not grade school boys with sharpies. The OT&W marks the start of a new year of train shows, and with the star of a new Year we wanted to do something new. For those of you who braved the storm, we hope you were rewarded by what you saw. We know that we certainly were. Your gasps of joy and that impromptu round of applause was music to our ears. With new scenes from Jurassic Park, Pirates of the Caribbean , Lord of the Rings, a new Zoo, the Bat Cave in LEGO City, and enhanced Oz Scene, and new trains we think we’ve brought out our “A” Game. what did you think?
visit our flickr page to see photos, and then let us know what you thought in the comments, and if you missed us, your next chance to see us will be in March at the Hostler’s Train Show in Ogden

LEGO Isn’t more expensive than it used to be!

Andrew Sielen who blogs at the Reality Prose has done a great analysis of the rising cost of LEGO sets, and concludes that the perceived cost of LEGO is a fallacy. yes it’s expensive, but it has always been so. Andrew Considers it all, licensed vs unlicensed sets, piece count in set, inflation changing molds, and weight of the brick. it’s a fabulous read. Take a minute and see what you think. The Annual Hostler’s Train show was great!!!
As a club we got some great press from the Likes of KSL’s Doug Wright who on Air said that

the best part of the Show is the Lego display…every year they add something new. This year there’s Plexi glass so the kids can get right up to [the LEGO]”

We couldn’t agree more. This show featured Travis Levi Murphy’s Wizard of Oz Diorama, as the newest addition to the layout. and it was impressive. Click on the Image above to check out pics of it or some of the other sections of the layout.

If you missed it don’t sweat, We’ll be showing it and the whole layout again at the upcoming Trapper Trails council Scout O Rama.

Some Time ago this MOC was made by builder Marshall_Bannana for the EuroBricks Spaghetti Western Building Contest, It was then featured on the Brother’s Brick, and is Now up on CUUSOO just waiting for your votes so it can be turned into (a) real set(s).

I thought this set was awesome the first time I saw it, the details are stunning, the hues matted enough that it feels like a dust storm has rolled through the prairie and through town at least a couple times already. So when I saw it on CUUSOO about a month a go, Marshall_Bannana got my vote. And I still love it, enough so that If I could vote for it twice I would, but I can’t so I’m joining the throng and petitioning you for your votes as well.

If your some how still not swayed to support the project let me point out a couple of things: The two sets that have gone through CUUSOO so far have all come out better than they went in. The SHINKAI, and Hayabusa were good, but got even better.

This is the only Idea over 1,000 supporters that is not based on an existing licence, and really wouldn’t you rather have some sets that are not subject to the “liscenced” set price hike. Finally, It’s western, I’m imagining the specialty pieces that would be added when Lego turns it into a real set, cowboys Indians, Tumble weeds, lizzards, tan snakes, a whole mesh of sheriffs, and bandits.

So move that mouse on over and support the project